To share your memory on the wall of John Smith, sign in using one of the following options:

Receive notifications about information and event scheduling for John

We encourage you to share your most beloved memories of John here, so that the family and other loved ones can always see it. You can upload cherished photographs, or share your favorite stories, and can even comment on those shared by others.

Jan Mulligan and Don Bliss sent flowers to the family of John Garth Smith.
Show you care by sending flowers

Posted Mar 29, 2021 at 12:40pm
Hello Janet:
I was so sorry to learn this morning that Garth has passed away just over a week ago. Please accept our very sincere condolences. Reading the notice of Garth’s passing brings back to me many happy memories of days long past but certainly never forgotten.
Patricia passed unexpectedly on February 20th and I am still trying to come to grips with that loss. In looking back at family photos of Pat in the days immediately following her passing I
happened to see several photos of you and Garth which are in my photo albums.
What amazing memories came flooding back to me.
You have been a wonderful couple together throughout the years and Garth will be deeply missed. Once again I’m so sorry for your loss.
With Love from your cousin
Diane and Art West

Posted Mar 24, 2021 at 06:08pm
Dear Janet and family, It was very saddening to learn of Garth's passing. I will always remember our talks at the condo Christmas dinners and seeing each other at the mail box discussing hockey and cars. Sending you my sincere condolences and keeping you in my thoughts and prayers during this difficult time. Garth had a life well lived, may those memories bring you peace and comfort in the days ahead.
Elaine Bessie
Comment Share
Share via:

Posted Mar 24, 2021 at 05:58pm
Janet and family--- So sorry to hear of Garth passing-- we will miss him- such a nice guy- treasure your memories-- love Jan and Pete Walker
Comment Share
Share via:
J

Posted Mar 24, 2021 at 08:33am
Dear Janet and family. We are so sorry to hear about Garth's passing. We have enjoyed many laughs and stories over our Lottery lunches. Please accept our sincere sympathy and thoughts. Judy & Bob Sinnaeve
Comment Share
Share via:
CA

Posted Mar 23, 2021 at 09:49pm
Garth was a light in our condo community, a friendly, welcoming, and warm neighbour. When he stopped to talk, he was always had something interesting to share. He was kind and thoughtful. We will miss him terribly. We feel very sad for Janet and the rest of the family. May your memories sustain you. He was very loved. Vince and Cathy Astolfo
Comment Share
Share via: 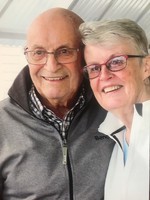