To share your memory on the wall of James Pilkington, sign in using one of the following options:

Hearts are shattered again with the loss of our family foundation, James (Jim) Pilkington. Passing peacefully Thursday, March 18th, 2021 at the Brantford General hospital with sons James and Andrew at his side. Reunited ... Read More
James Pilkington

Hearts are shattered again with the loss of our family foundation, James (Jim) Pilkington. Passing peacefully Thursday, March 18th, 2021 at the Brantford General hospital with sons James and Andrew at his side. Reunited with his wife Patricia (Pat) Pilkington, who passed such a short time ago in November 2019.

Born during the hardship of war, May 16th, 1939 in Manchester, England. Son of Josephine and James Pilkington, Jim was the oldest of two children and is survived by his sister Pauline Newton in Denton, Manchester. Leaving school in 1954 he progressed as a skilled tradesman, married Pat in March 1961 and served in the RAF until 1963. His skills as a tool cutter and grinder gave opportunity to the family, first immigrating to Australia, returning to England in 1970, then settling in Brantford, Ontario in 1974. Jim worked at Koehring Waterous, FMG Timberjack until their closing in 1992. Employed at Westinghouse Siemens in Hamilton until retirement in 2003, He was renowned for the quality of his work, and dedication to family and friends.

Jim was a avid fisherman, golfer and sports fan. He especially loved soccer, played in England, Australia and Canada. He is past president of the Brantford Ex-Imperial soccer club and is known as a huge supporter of his home team Manchester United. Well known for his generosity and loving support to Cindy and Jim Pilkington, Lois and Andrew Pilkington and granddaughters Nikki, Courtney, Hayley, and Kennedy. Thanks to the many LTC caregivers at Telfer Place, Paris. James will be missed and remembered by workmates, friends, family and fellow Ex-Imperial members. Due to Covid-19 a private family service will be held. Messages of condolence may be left at www.tollfh.ca
Read Less

Posted Mar 24, 2021 at 12:58pm
Jim was a great friend,a great soccer player and fan.He had a wonderful wife and family.
He would give you the shirt off his back unless it was his Man United one.
We have great memories of him.
REST IN PEACE JIM
Mike and Anne McQuade and family.
Comment Share
Share via:
DG

It is with great sadness that we learn of the passing of your Dad Jim. He was truly one of a kind. We hope you find peace in knowing that Pat and Jim are together. May your faith, love of family and friends guide you through this most difficult time. 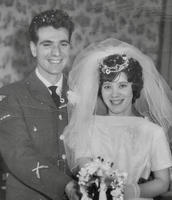