To share your memory on the wall of Donald Guindon, sign in using one of the following options:


Don was born in Almonte, Ontario in 1946, but moved to Brantford as a small child. Along with his younger brother Ron, Don grew up on Gladstone Ave in the house that his parents, Rae and Albert, owned for over 50 years. He had a large extended family, and he was close to several cousins throughout his life, including Bob and Rick Moulton, and Gary, Brenda and Ken Lynch.


Don worked at Harding Carpets for a couple of years, then at the age of 22 he took a job at Gates Rubber, where he stayed on in the plant until retirement, working his way up to a supervisory position. Don met two of his closest friends at Gates, Ron Kovacs and Moss Monteith, who became lifelong friends. It was common practice during the work week for Don to go to his parents’ house for lunch, since they lived close to Gates. He enjoyed their company of course, but he also indulged his life-long sweet tooth with his mother’s famous desserts. He remained very close to his parents and brother throughout his life.

When his three daughters were born, Don took on the role of loving father with ease. For most of his life he worked the 7-3 shift at Gates, which allowed him to spend time with his children in the evening. When his girls were in high school, Don picked them up after school every day and drove them home or to their various jobs. This gave him the opportunity to stay close to his daughters, through the teenage years and beyond. He was a dedicated family man, and his love was naturally extended to his two step-children, and eventually to his 7 grandchildren.


Don and Margie met through a blind date arranged by Don’s cousin Brenda, who worked with Margie at Levi’s. They soon took on the ambitious task of raising their five children together. Summers were spent camping at Crestwood Lake, where they had many adventures and campfires with friends, in particular Moss and Jan Monteith, as well as family members Ron and Dean Guindon, Brenda and John Bridgewater, and Ray and Karen Donovan. When their kids were grown, Margie and Don continued to enjoy camping for many years. They also decided to forego the cold Canadian weather, and they spent many winters down south in Florida, where they had many friends. Don thought nothing of the long drives to Florida. He loved to drive and was proud of the fact that he drove for nearly 60 years accident free.


Don struggled with his health in the last five years of his life, making it increasingly difficult for him to enjoy life to the fullest. He spent more and more time at home, on the couch with his beloved dog Starla on his lap. Don will be forever remembered by those who knew him as a hard working, dedicated and loving family man and friend.


“The best portion of a good man’s life is his little nameless unremembered acts of kindness and love.” (Tintern Abbey, poet)

Posted Dec 27, 2020 at 12:33am
I still remember when my cousins moved to Brantford to live across the road from us on Gladstone Ave. Donnie was like a big brother and Ron like a younger brother . When we moved away I finished school in Ottawa and never moved back but when I visited my brother or sister I occasionally would run into Don and we would fondly remember our " adventures " . RIP cousin Don Ken Lynch
Comment Share
Share via:

Thank you, Kenneth, for sharing your fond memories and your kind words. Sincerely Margie G.
MH

Thank-you so much Marilyn.
HS

Flowers were purchased for the family of Donald Guindon. Send Flowers

Posted Dec 23, 2020 at 03:49pm
Dear Margie (Starla) and Alisha Kim and Kelly and Lloyd and Lisa and their Families
Our deepest sympathy in the loss of a dear husband father grandfather and brother
Reading cousin Don's obit shedding a tear brought back some beautiful memories
I have a book of memories and a album full of pictures
The picture of cousin Don standing in front of his car brought back memories of him getting his first driving lessons from Auntie Rae in Renfrew On with Cousin Ron and me in the back seat that for sure turned out to be a adventure
That was cousin Don's first car money he had spent winnings from a contest he had won from coke cola
In 1967 I travelled with Uncle Ab Auntie Rae cousins Don and Ron to the big event Expo 1967 in Montreal we stayed at cousin Don and Ron's cousin Barb's house I still have the Expo ring cousin Don bought me
Christmas dinners at Uncle Ab's and Auntie Rae's would be served in the small front room with cousins Don and Ron with lots of love and laughter in the room and yes cousin Don's lemon pie was sitting in the back room on the deep freezer ready to be served to him providing brother Buck did not get it first
To cousin Don and his best friend Ron Kovacs with their black leather jackets on taking me for a ride on the motorcycle
To cousin Don holding his first baby girl Alisha born on Pearl street to his 2 other baby girls Kim and Kelly born in his first home on Aberdeen street Uncle Ab and Auntie Rae were in their glory
To your blind date at the Erie beach in Port Dover where you met the love of your life Margie
To your wedding at at your beautiful home in front of family and friends
To the great times at the Levi Christmas parties to celebrating New Years Eve with family and friends at the Navy club
To our wonderful times at Crestwood Lake celebrating your 40th
birthday party to sitting around the fire with family and friends playing a few tunes and singing a song or two or just maybe having a couple of cold ones
And then our last BBQ together with family and friends and special guests Dale and Gerry Dunn from our old neighbor hood Gladstone Ave
I could go on and on about how many special times were shared over the years and what a very special cousin you were to me
I have your baby picture hanging in my rec room along with your cousins and Aunts Aunt Dorothy and Bill Lynch Aunt Dorothy and Raymond Crampton and my Mom Lola and brother Ken Lynch all born between 1946 /1947
I know cousin Don is in a very special place now and no more suffering
love Jug (Brenda) xo

Sorry for your loss Margie thinking of all of you and your family .Lots of memories Brenda .Hugs to all
KG

Thank you for sharing so many memories, Brenda. That 40th birthday party at Crestwood was epic! I will never forget Dad cutting his giant cake from corner to corner. Margie had to try to salvage it and served everyone triangular pieces of cake! Love, Kim
AW

Thank you Brenda for sharing your memories of the family. You are a big part of Dad's life and history and you can hear the love you have for him. I hope his driving didn't scare you too badly ! Love Alisha
MG

Thank -you Brenda, your memories are now your treasures. Love you.
4 Comments | Show All 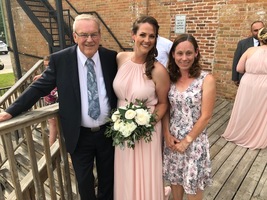 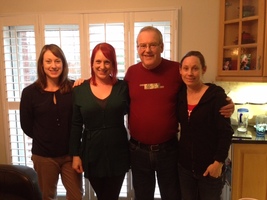 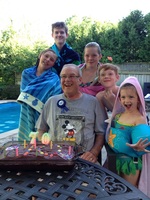