To share your memory on the wall of Laddie Tohivsky, sign in using one of the following options:

Receive notifications about information and event scheduling for Laddie

We encourage you to share your most beloved memories of Laddie here, so that the family and other loved ones can always see it. You can upload cherished photographs, or share your favorite stories, and can even comment on those shared by others.

No matter how old we are it is never easy to lose a parent/ Grandparent. My thoughts are with you all. He was loved by all. Nancy
Comment Share
Share via:
SM

Posted Oct 13, 2020 at 12:01pm
To the entire Tohivsky family, our thoughts are with all of you at this time, it is always hard losing a parent, you were all very lucky to have him for as long as you did! Just think about all the wonderful memories you have! In this pandemic just know that if we could be there we would, hugs to all of you!

Posted Oct 13, 2020 at 10:37am
Dear Murray, Gary, Don, Shari and families, Our sincerest condolences on the loss of dear Uncle Laddie. Love, hugs, and sympathy,

Flowers were purchased for the family of Laddie Tohivsky. Send Flowers 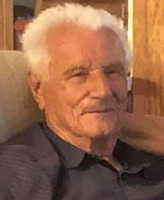