To share your memory on the wall of James Draper, sign in using one of the following options:

Posted Aug 01, 2020 at 01:14pm
Dear Shirley.......
I'm so sorry to hear of Jim's passing. My thoughts and prayers are with you and yours at this very difficult time. I know that all of you have wonderful memories that will live on in your hearts for the years to come.

Dear Shirley. and Family... I am so saddened to read about Jim's passing. We spent so many good years together as good friends both on and off stage, attending and participating in Brantford Drama league rehearsals; productions, and after parties. So many good dinner parties. ,pool parties and travels with the 6 musketeers He was an amazing actor and director as well as great dad; a fabulous grandad and wonderful husband. He is now at peace.. GOD bless HIM.. He will be sorely missed. Love and HUGS. Marilyn 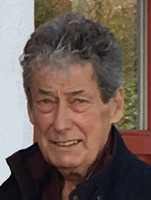