To share your memory on the wall of Donald Grinton, sign in using one of the following options:

Posted Jul 08, 2020 at 08:36am
Very sorry to hear about the passing of Don. Donald and Elsie were our next door neighbors for 24 years and we could not have asked for more friendly and caring people.
Comment Share
Share via:
MR

Posted Jul 04, 2020 at 07:57am
Very sorry to read this morning of Don's passing.. I first met Don back in or about 1967-8.. Don was managing a credit operation and my Dad who owned the Big M Furniture used to run his sales contracts through Don.. I was not quite a teenager way back then but the one thing I've always remembered about Don was his great sense of humor...it takes little to conjure up the sound of his laugh in my mind..Very sorry for the families loss..
Comment Share
Share via: 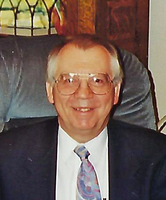