To share your memory on the wall of John Gordon, sign in using one of the following options:

Receive notifications about information and event scheduling for John

We encourage you to share your most beloved memories of John here, so that the family and other loved ones can always see it. You can upload cherished photographs, or share your favorite stories, and can even comment on those shared by others.

Posted Jun 29, 2020 at 12:03pm
I will always remember Mac and Helen as very faithful choir members. We first became acquainted when I was choir director at Fairview United in 1975 and later on we joined again at Sydenham United. Mac and Helen also we part of Christmas cantatas and joined in with Strawberry Social music and fun at Harmony United. Mac was still singing bass in the church choir up until 2018.
Sylvia & Bill Jarvis
Comment Share
Share via:
DS

Posted Jun 27, 2020 at 10:42am
Edward Freeman sends his sincerest condolences. He truly enjoyed singing in the Harmony United Choir with Mac.
Comment Share
Share via:
SM

Posted Jun 26, 2020 at 09:21am
Hello
I am so sorry to hear of your father's passing. How lucky you were to have him in your lives for so long. Please accept my deepest sympathies and know that I am thinking of all of you at this difficult time. I have made a donation to the Canadian Cancer Society in his memory 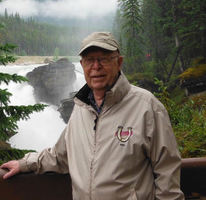