To share your memory on the wall of Edna Coleman, sign in using one of the following options:

Edna’s childhood years were spent on the Eadie farm in Burtch. She often spoke about walking the long distance through the fields to school each day. Later, her mode of transportation was with horses into Brantford where she attended Brantford Collegiate Institute.

Edna eventually moved to Brantford where she worked several jobs over the years. In time, Edna was swept off her feet during a tag foxtrot at a local dance.

Edna and Harvey were married on June 14, 1941. Harvey was Edna’s dance partner for 60 years. Edna enjoyed many years of hard work on the family farm while being an active member of Salt Springs United Church. Her Blossom Avenue family brought her so much happiness. Her delicious baking was enjoyed by all. Saturday night dance parties with friends was something she always looked forward to. Especially, dressing in fine party gowns. Eventually, Edna and Harvey became a family of five with the addition of Brian, Brenda and Linda. Life on the farm was busy but Edna always made time for family and friends.

Edna and Harvey retired to Mt. Pleasant in 1972. Edna widened her circle of friends in this community and cherished times spent at Mt. Pleasant United Church gatherings.

Edna was so very proud of her grandchildren. She looked forward to family gatherings at Dunrovin where she could enjoy their laughter and smiles.

Edna and Harvey moved to Brantford in 2001. The addition of nine great grandchildren always filled her with so much joy.

Edna’s gentle way and infectious smile have left an imprint on everyone she touched. Heaven just got an angel.

Special thanks to Dr.Khanna for her compassionate care of Mom.

The family would like to express a heartfelt thank you to family members and friends for your acts of kindness towards our very special Mom.
Read Less

Receive notifications about information and event scheduling for Edna

We encourage you to share your most beloved memories of Edna here, so that the family and other loved ones can always see it. You can upload cherished photographs, or share your favorite stories, and can even comment on those shared by others.

Posted Jun 07, 2020 at 05:30pm
Linda, so sorry for your loss. Jeannette shared with me how close you were to your mom. She was certainly blessed with a full life, you must have many beautiful memories. Take care. Jocelyne Lalonde
Comment Share
Share via:
CP

Posted Jun 04, 2020 at 02:16pm
Linda, my condolences to you and your family on the passing of your sweet mother.
I enjoyed perusing your lovely photo tribute which showed her ever-present smile as I remember it from so many years ago.
May she Rest In Peace with her beloved Harvey.
Sincerely,
Cathy Pinnell
Comment Share
Share via:
TI

Posted Jun 04, 2020 at 10:07am
Hi Brian and Joan and other family members,
We were sorry to learn of your mum's passing and extend our deepest condolences. Reading the obituary, "Edna's gentle ways
and infectious smile" summarize our memories of a lovely lady.
Jim & Trudy Ion
Comment Share
Share via: 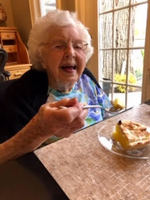