To share your memory on the wall of James Smith, sign in using one of the following options:

Posted Jan 30, 2020 at 09:14am
Sorry to hear of Jim's passing. My husband Bruce remembers him at Northridge Golf Course and I remember he used to work at Bursey Upholstery.
Take care!
Edith & Bruce Freeze
Comment Share
Share via:

Posted Jan 23, 2020 at 05:59pm
I'm so saddened by his loss. Condolences to everyone in the family. May his memory live on with you forever.
Comment Share
Share via:
LG

Thank you for your kind words Christine.
HS

Thank you Vera.
VS

Posted Jan 22, 2020 at 06:32pm
Death leaves a heartache no one can heal. Love leaves a memory no one can steal. You were loved by many and will always be remembered. May you rest in peace.
Comment Share
Share via:
LG

Thank you Vera for those beautiful words. Love to you. xo. Also, thank you for helping the planet in my grandfather's name.
LS 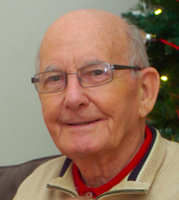