To share your memory on the wall of Robert Penrice, sign in using one of the following options:

Provide comfort for the family of Robert Penrice with a meaningful gesture of sympathy.

We encourage you to share your most beloved memories of Robert here, so that the family and other loved ones can always see it. You can upload cherished photographs, or share your favorite stories, and can even comment on those shared by others.

Sending hugs from near and far, Ash, Erin, Kris & , PYNX Family, and others have sent flowers to the family of Robert Ellsworth Penrice.
Show you care by sending flowers

Posted Nov 06, 2019 at 03:01pm
Chels, My heart is breaking for you. I know how close you were. I hope this living tribute will remind you of only the good memories.

Flowers were purchased and a memorial tree planted for the family of Robert Penrice. Send Flowers

Flowers were purchased for the family of Robert Penrice. Send Flowers

Sending hugs from near and far, Ash, Erin, Kris &

Sending hugs from near and far, Ash, Erin, Kris & purchased flowers for the family of Robert Penrice. Send Flowers

Posted Nov 05, 2019 at 10:31am
Sincere condolences go out to Bob's family at this time of great sorrow. Bob lived a long and good life and touched the lives of so many people. A donation has been sent to Central Baptist Church in Brantford as a memorial to Bob from Carole Logan and family.
Comment Share
Share via: 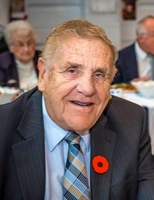