To share your memory on the wall of Roma Bonnallie, sign in using one of the following options:

Provide comfort for the family of Roma Bonnallie with a meaningful gesture of sympathy.

Roma moved from Magog, Quebec to Sarnia where she lived for several years and made many new and dear friends. Roma was an employee of Woolworth. She volunteered for many years to the local food bank and also for the Red Cross.
She decided to move to Brantford 5 years ago to be closer to her family. Since her move she has formed new friendships, and was able to spend more time with her family.
In keeping with Roma’s wishes cremation has taken place. A celebration of life will be held at a later date.
If desired donations can be made to Nova Vita or to The Stedman Hospice. Arrangement have been entrusted to the TOLL FUNERAL HOME.
*Family is not an important thing. It is everything*
“Michael J. Fox”
Read Less

Receive notifications about information and event scheduling for Roma

We encourage you to share your most beloved memories of Roma here, so that the family and other loved ones can always see it. You can upload cherished photographs, or share your favorite stories, and can even comment on those shared by others.

Posted Jul 13, 2019 at 12:53pm
I met Roma about 5 years ago, at St. John's Church in west Brant. When St. John's closed we went to Grace Church. Every Sunday I picked Roma and two other ladies up and we went to Grace together.
Roma and I attended other functions at Grace together. She was a Beautiful lady, in every way. I was privileged to call Roma my friend,
Roma - I miss you. 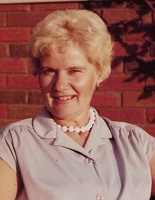