To share your memory on the wall of Edward Mazurek, sign in using one of the following options:

Receive notifications about information and event scheduling for Edward

We encourage you to share your most beloved memories of Edward here, so that the family and other loved ones can always see it. You can upload cherished photographs, or share your favorite stories, and can even comment on those shared by others.

Posted May 01, 2019 at 07:20pm
That’s my brother right there a man that always made me feel great and always loved to laugh to no end I’ll miss his calls and his texs reminding me he needs my butt to get to the gym for a pump or a great laugh or just to tell me to have a great day and he loved me. I’ll also miss him working with us on my crew doing parking-lots he was a worker of all workers and just fun to be around my guys loved him. I’ll miss ya kid always and forever your buddy.... chuck taylor 💔💔💔
Comment Share
Share via:
D

Posted Apr 27, 2019 at 08:35pm
I got to know Eddie when i was going to the gym and we always talked about how the leafs were doing or the blue jays he loved sports u could tell and i took up riding my bicycle and quite often I'd ride past his house and he would be sitting out front and i would stop and he'd chat about the new players the leafs acquired I'd laugh and so would he. Eddie was easy to talk to and will be sorely missed I'm sure. Rest in peace eddie I'm glad i had a chance to know you.
Comment Share
Share via:
MB

Posted Apr 26, 2019 at 01:25pm
Our heartfelt prayers to all touched by Eddie’s passing. May his presence forever be felt in your hearts. Much love. 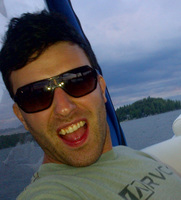