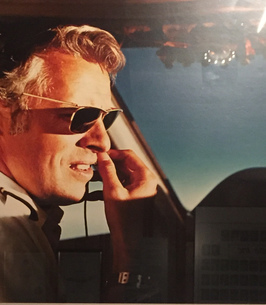 Print
Oh! I have slipped the surly bonds of earth,
And danced the skies on laughter-silvered wings…
After a short illness and with his family by his side, Wayne Gordon Kirby passed away at the Hamilton General Hospital on September 2, 2018. Wayne, the oldest son of the late Edward Gordon and Lola Evelyn Kirby (nee Oliver) was loved by many. Wayne is sadly missed by his wife, Orreilia “Orry” Kay (nee Spence), his three children, Jeff (Lori), Lori (Brian Wood) and Leigh Ann (Charles Mojsej) and his beloved grandchildren, Kyle, Hannah, Drew, Payton, Sarah and Maggie. Wayne leaves behind his siblings Garry (Diane), Martin (Gayle) and Lynn (Terry Colfer), many nieces and nephews and numerous lifelong friends. Born in Kapuskasing, Ontario in 1936, Wayne spent most of his youth living in Montreal West and summering at the family cottage in the Gatineau Hills – a place that he loved so much and returned to frequently. While enrolled in an engineering program at UNB, Wayne decided that airplanes were his true passion, ultimately leading to his commercial pilot’s license and a 41 year career in aviation. He started his commercial aviation career as a first officer with Trans Canada Airlines in Montreal. During this period, Wayne met his lifetime partner Orry, a flight attendant with Trans Canada. Wayne and Orry were married for 56 years. From the Super-constellation to the Chief Pilot on the Boeing 747, from Wardair to Canadian Airlines, Wayne flew hundreds of thousands of passengers, over his career, safely to their destinations. He was described as a pilots’ pilot and spent many hours training other pilots to achieve their aviation goals. When not in the sky, Wayne was happiest spending time with his family. A supportive father who inspired in his children a love of travel, Wayne’s true calling was as a grandfather. Incredibly proud of the achievements of his children and grandchildren, Wayne tracked their comings and goings around the world through social media and regular phone calls. To be part of Wayne’s inner circle was to know that you were loved and supported. Whether a note or funny post when you were feeling down or an edition of the Brantford Bugle when homesick away at school, Wayne’s wicked sense of humour and intelligence were always evident. Wayne Gordon, WG, Captain, Dad, Grandpa – the world is a much duller world without you in it.
A heartfelt thank you from the family to the nurses and doctors in the Brantford General ICU and Hamilton General ICU (East and West) for their care and compassion and extraordinary efforts on behalf of Wayne. Special thank you to Doctor Dyub and Doctor Ainsworth for their expertise and bed side manner. A Celebration of Life will be held at the Brantford Golf and Country Club, 60 Ava Road, Brantford on Sunday, September 23, 2018 from 2 – 5 p.m. A family gathering will be held in Wakefield, Quebec to lay his ashes to rest at a later date. Those wishing to honour Wayne’s memory, are invited to donate, given his love of animals, to the Brant County SPCA or to the Mark Preece House which was a haven for Wayne’s family during his illness.

We encourage you to share any memorable photos or stories about Wayne. All tributes placed on and purchased through this memorial website will remain on in perpetuity for future generations.

Our deepest condolences to Wayne's family.
Kathy Ruston and Shayne Mann - Friday September 14, 2018 via Donation
To: BRANT COUNTY SOCIETY FOR THE PREVENTION OF CRUELTY TO ANIMALS
Share This:

CA
My deepest condolences to Orry and the rest of the close knit family. Wayne was clearly loved by many and respected by all those who knew him. I am sorry I didn't get to know him better. Craig Ainsworth.
Craig Ainsworth - Wednesday September 12, 2018 via Condolence Message
Share This:

In memory of Wayne... Deepest condolences to the family. Our thoughts & prayers are with you.
Michael & Carolyn Mojsej - Wednesday September 12, 2018 via Donation
To: BRANT COUNTY SOCIETY FOR THE PREVENTION OF CRUELTY TO ANIMALS
Share This:

our deepest sympathy for u and your family , our thoughts and prayers are with u
frank and tracy uvanile - Monday September 10, 2018 via Donation
To: BRANT COUNTY SOCIETY FOR THE PREVENTION OF CRUELTY TO ANIMALS
Share This:

DD
Orry, Lori, Jeff & Leigh Ann, I was so sorry and saddened to hear of Wayne's passing. Please know that you and your families are in my thoughts at this time, as are the wonderful memories I have of Wayne and his wicked sense of humour. With deepest sympathy, Donna Duncan
Donna Duncan - Friday September 07, 2018 via Condolence Message
Share This:

SS
Dear Orry & family
We were so saddened to hear of Wayne’s passing. Wayne was kind, good and had an amazing sense of humour. I know he will be sadly missed by all. Thinking of you at this time of sorrow. Warmest Regards, Sue & Malcolm
Sue & Malcolm Singer - Friday September 07, 2018 via Condolence Message
Share This:

Thank you for sharing!

Provide comfort for the family by sending flowers.

Or use your email:

Provide comfort for the family by sending flowers.

Connect with families at their time of loss. By subscribing to email updates, you will receive two daily updates containing all new stories, photos, candle lightings, condolences, and more.